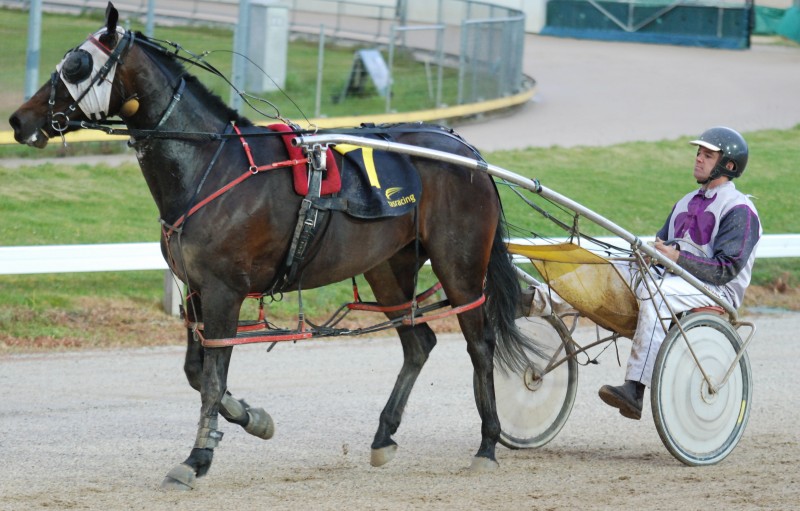 WHEN prominent harness trainer Christian Salter attended the Tasmanian standardbred yearling sale two years ago he hadn’t purchased a horse by the time the last lot entered the sale ring.

Armed with a desire to take a horse home but accompanied by maybe one too many glasses of amber fluid he ended up buying the last lot (a filly) for $8000 which was about twice the amount he intended to pay.

“I went to the sale to buy a horse so I just had to bring one home,” Salter said.

At Tattersall’s Park in Hobart on Sunday night the now four-year-old mare Pharoahs Wrath scored an impressive win in a 3YO non-winners event over 2090 metres, much to the delight of the mare’s owners – Sally McCoull, Tania Heenan, Toni Cowle, Stephanie French and Marlene Salter.

With Salter in the cart, Pharoahs Wrath settled midfield in the one-out line but sprinted quickly when she was eased three-wide to make her move heading down the back straight the last time.

Race leader Territorial started to feel the straight 200 metres and Blitzemgamble, that had faced the breeze from the outset, loomed to win.

But Pharoahs Wrath was to strong over the concluding stages to emerge triumphant over Fire Up Franco with Blitzemgamble hanging on for third ahead of Territorial.

“When we arrived home from the yearling sale I thought the best thing was to give the filly to my partner (Sally McCoull) and a couple of her workmates and friends and a share for my Mum (Marlene Salter),” the trainer said.

“She wasn’t very big and she hasn’t grown much since but she does have ability,” he said.

Pharoahs Wrath raced as a two-year-old and on debut finished fourth in the Hobart Belmont, beaten just over four metres.

But only a metre ahead of her that night was Barynya that went on to be Australian three-year-old of the year last season courtesy of her wins in the Tasmanian and Victorian Oaks.

“That she was close to Barynya on debut gave us some confidence but at her next start I got tipped out of the cart and for the rest of her preparation she was field shy,” Salter said.

“I tipped her out and we had almost forgotten about her.”

“We put her back in work and took her to the trials and she appeared to have forgotten about the incident that made her field shy.”

“She did well tonight and wasn’t afraid to work home between horses so we are optimistic about her immediate future without having any expectations,” Salter said.