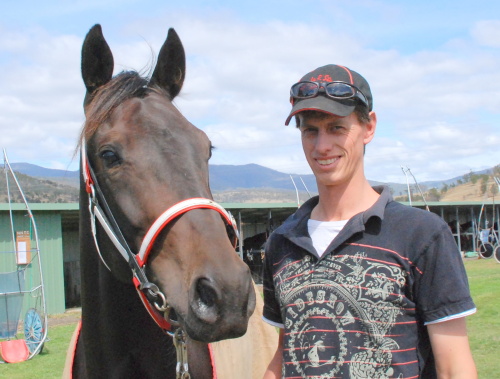 DESPITE scoring an emphatic win in Launceston last Sunday night, the connections of eight-year-old gelding Crash Cart have opted to put him on the market.

Crash Cart powered home to score comfortably after being given the run of the race by talented young driver Alex Ashwood who had him settled in the one-out-one-back position for most of the race.

The gelding was held up leaving the back straight but when Ashwood eased him three-wide to pounce the gelding knuckled down to his task and went on to defeat the fast-finishing Barkers Run by almost nine metres with Matai Nigel a close-up third.

Trainer Heath Szczypka spent a lot of time eradicating a few bad habits the horse had when he first arrived at his stables but once he found the secret the gelding made great improvement.

Crash Cart’s part-owner Mark Rowlands, who races the gelding in partnership with the trainer and his wife Melanie Szczypka, said the horse had been good to them.

“He’s been a good money spinner since we got him almost three years ago but when Heath first got him he hadn’t won a race.”

“He raced roughly and used to break all the time but Heath (Szczypka) changed his shoeing and did a few things differently and now we’ve won five races with him and he’s also run 11 minor placings,” Rowlands said.

Szczypka said Crash Cart, who was bred in NSW by Joanne Anderson, was on the market at $4000 and the trainer believes he would be a bargain for a first-time owner.

“I’ve got 15 horses in work with two two-year-olds being broken in and I’ve got five yearlings in the paddock and four mares due to foal, so I have to move some horses on,” Szczypka said.

“Crash Cart would be great for a first-time owner because he’d virtually only have to win one race to pay for himself,” he said.