Laugher rustles up a win with 3YO 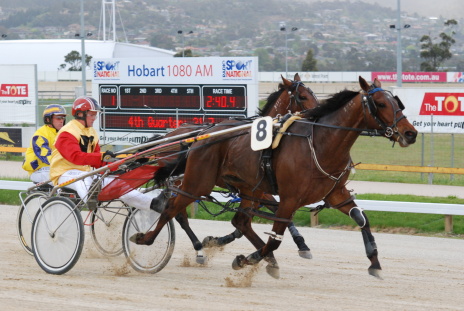 RUSTLE MURRAY overcame a bad barrier to finally break his maiden status when he powered home to win the TPC Christmas Party 18 December Stakes over 2090 metres at Tattersall’s Park in Hobart on Sunday night.

Rustle Murray had notched five minor placings and finished fourth I three other of his 12 starts leading up to this latest assignment and according to his trainer Michael Laugher the gelding thoroughly deserved to break through.

Rustle Murray drew the inside of the second row (8) but his driver Gareth Rattray was able to extricate the three-year-old from the rails running midrace and had him three-wide heading down the back straight poised to pounce turning for home.

When Rattray called on the son of Rustler Hanover for the big effort 200 metres out he hauled in the leaders and went on to score by two metres from Camelotpocketroket that faced the three-wide line for the last lap, with Taspacedotcom over four metres away third.

It was an impressive win and one that will most likely see the gelding off for a well-earned break.

Listen to what trainer Michael Laugher had to say about Rustle Murray’s impressive win – click here.