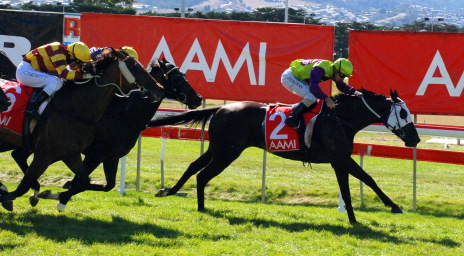 DESPITE the ease with which star Tasmanian stayer Geegees Blackflash dispensed with his rivals in the AAMI Hobart Cup last Sunday, interstate trainers have still rallied to make up the majority of the 26 nominations for the 2012 AAMI Launceston Cup at The TOTE Racing centre on February 29.

Of the 26 nominati0ons 16 are from interstate with Darren Weir, Colin Little and Colin and Cindy Alderson each with two nominees.

Weir has nominated The Night’s Hot and last week’s Morong Cup (2200m) winner while Little has entered Tanah Lot and The Southern with team Alderson paying up for Montgomery and Mornington Cup placegetter Sea Galleon.

Tony Vasil has nominated Apprehend and Mike Moroney is persevering with Viking hero that was second to Geegees Blackflash in the Hobart Cup.