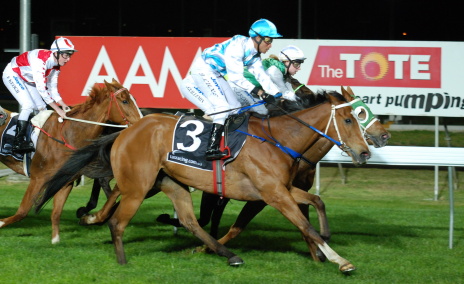 Tomorrow night’s meeting at Launceston will be the first of a series of race meetings to be regularly broadcast and wagered on in France as part of a deal announced today by Tabcorp.

The new racing export deal means that French punters will be able to bet on races 6, 7, 8 and 9 from Launceston tomorrow through leading wagering operator PMU.

The races, including the Shaw Magic Millions 2YO Classic and the Carlton Draught Vamos Stakes, will be broadcast into French homes and retail outlets through racing broadcaster Equidia TV.

France is one of the world’s biggest wagering markets. In the first part of the deal between France Galop and Tabcorp, France will be taking Australian race meetings each Wednesday night. Up to four races from the Wednesday night Launceston meetings will be broadcast in France through to the end of March.

France has previously taken single Australian events and selected trotting races but this is the first time that Australian racing has been part of the French wagering schedule on a regular basis.

“France is a significant global wagering market and we look forward to continuing to work with our French partners to develop more export opportunities. Later this year, France will take more of our premier trotting events, given the strong French liking for trotting.”

Tasracing Chief Executive Officer Gary Lottering said the meeting would deliver quality racing for French punters, and was an ideal way for the new arrangement to start.

“From a Tasmanian perspective, the broadcast of Tasmanian product through Sky Racing into one of the world’s biggest wagering markets opens up a new funding stream for the Tasmanian industry through overseas product fees,” he said.

Mr Lottering said Tasracing identified the export potential for night racing for a national and international audience some time ago and had been working with the Launceston-based Tasmanian Turf Club (TTC) and Sky Racing to open up potential new markets since then.

“Accessing new markets take time. But the hard work by a number of parties is set to pay off following the finalisation of this agreement. This is a very important outcome for Tasmanian racing, particularly at this time of the year when we are hosting the AAMI Tasmanian Summer Racing Carnival,” Mr Lottering said.