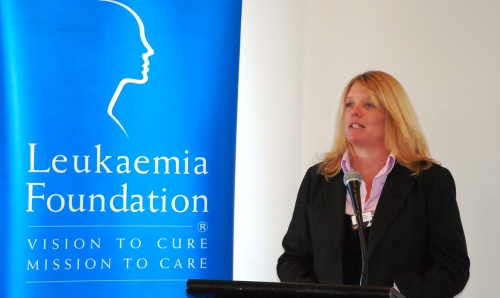 WHEN Tasmanian harness racing stalwart Leigh Plunkett was diagnosed with leukaemia and hit by the realisation that his ailment was terminal his family rallied behind him to help the talented trainer-breeder through the illness.

The disease claimed his life over two years ago but his dying wish delivered to his family members was to try and help the Leukaemia Foundation because of the incredible support it gave him and his family through his ordeal that lasted six months.

In Hobart today The Launceston Pacing Club delivered a sizable donation to the foundation with the club’s chairman Joel Wallace handing over a cheque for $2000 that will assist with the foundation’s ongoing costs associated with assisting leukaemia patients and their families to deal with the illness.”

The cheque was handed over at a special function at Mawson’s Pavilion on Hobart’s waterfront.

The function was organised by LF to acknowledge the major contributors to the foundation, primarily from fundraisers who worked tirelessly to raise money for the organisation with most coming from the World’s Greatest Shave campaigns held across Tasmania.

“Leigh Plunkett was one of Tasmania’s most revered harness identities and we were made aware of his wish to support the Leukaemia Foundation so the cheque we delivered today to the foundation is testament to our industry’s support and commitment to see Leigh’s wishes realised,” Wallace said.

The general manager of the Tasmanian branch of Leukaemia Foundation, Stephanie Hechenberger, said the organisation was thrilled with such a sizable donation.

“The Leukaemia Foundation receives no ongoing Government funding so we are totally reliant on the generosity of the general public,” Mrs Hechenberger said.

“We are here today to thank and honour the top Tasmanians and thank them for their fantastic fundraising efforts.”

“We are very fortunate that Tasracing and many of the racing clubs around Tasmania are supportive of the Leukaemia Foundation and we are particularly pleased with the Launceston harness club’s sizeable donation.”

“Tasracing’s Communications and Media Manager, Wendy Kennedy, has been a great supporter of this foundation and the support we have had from an industry that Leigh Plunkett was involved in is quite amazing,” she said.

The racing industry as a whole has always been willing to get behind organisations that require financial support so Mrs Hechenberger is hoping that association continues to grow.

Wendy Kennedy is Leigh Plunkett’s sister and she has worked closely with LF over the past two years to help raise awareness of the organisation, in particular through sporting bodies.

Some of the major contributors at the function included Centrelink, HOFM and numerous family groups who have raised substantial sums of money to help the foundation achieve its goals.

Mrs Hechenberger said The World’s Greatest Shave is an international event and in its 12th year and this year the event raised $14.5 million nationally of which $250,000 was raised in Tasmania.