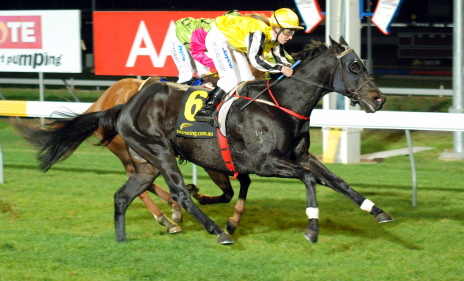 FORMER smart sprinter Lavaca returned to form at The TOTE Racing Centre in Launceston last night, much to the anguish of most punters.

Lavaca had not won in just over 18 months which was why he started the rank outsider at $73.20 but the flashy black gelding delivered the goods like the Lavaca of old.

With talented apprentice Rhagan Cross aboard, Lavaca travelled well outside of the leader Krakeour ($7.60) and when she called on the five-year-old for the supreme effort he dug deep and claimed the leader in the shadows of the post to score by a long neck with the heavily backed favourite Lightly Spiced ($2.00) over two lengths away third.

Trainer Graeme McCulloch said the win was not “totally unexpected”.

“The horse has had a wind problem this preparation but nothing to do with his respiratory system.”

“After his last Hobart run he wouldn’t stop farting so I changed his feed and this is the result.”

“It must have been the change of diet because I can’t offer any other explanation for his form reversal, although I ran him over 1400 metres last time when this distance (1100m) is really his go.”

“If he can hold this form he’ll be very competitive in whatever we aim him at,” the trainer said.

Cross was thrilled with the win and said Lavaca was going to win a long way from homer.

Listen to what apprentice Rhagan Cross had to say about Lavaca’s win – click here .