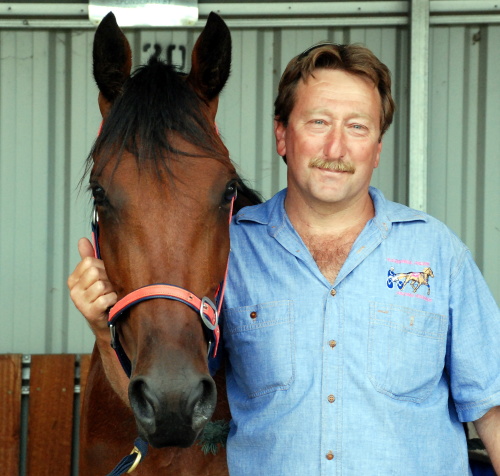 RUNNYMEDE trainer Steve Lukac could aim his talented four-year-old pacer Left Loaded towards the Devonport Cup if he continues to show the form that secured him an impressive victory at New Norfolk today (Wednesday).

Left Loaded was having his first start in a month and went into the race a bit underdone but the Fully Loaded gelding made light of the task as he powered his way to a comfortable win over Twograndahand and Ark West in the E C Plunkett Memorial over 2150 metres.

It was Left Loaded’s fifth start this preparation but his runs have been well spaced by Lukac who said the breaks between races were purposeful.

Driver Nathan Ford allowed Left Loaded to settle midfield but when the pace slackened he sent his charge around the field to take up the running with two laps remaining.

The gelding pinched ha break and then held out serious challenges over the concluding stages.

It was the second leg of a winning double for Lukac who also prepared Sir Yoie to win the Don Knight Stakes over 2150m.

Sir Yoie had little form to suggest he would win but Lukac said the horse’s trackwork leading up to the race was very encouraging.

Listen to what trainer Steve Lukac had to say about his winning double – click here.