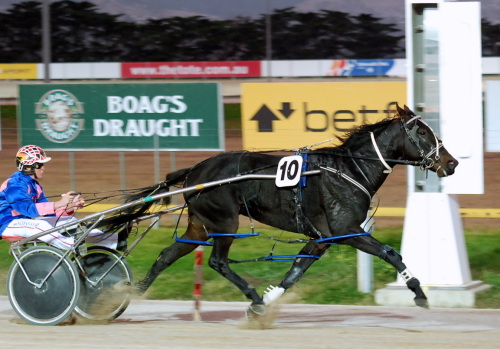 TALENTED three-year-old pacer Left Loaded produced one of the most impressive performances seen at the Tattersall’s Park track in Hobart this season when he powered his way to an effortless win in 3YO Brighton Real Estate Stakes over 2090 metres on Sunday night.

Left Loaded had been placed and very competitive against stronger opposition in three-year-old feature races and this latest assignment was a definite class drop.

But the way in which he demolished his rivals was very impressive scoring by 24 metres over Enchanted Heart and interstate invader Rufus Castle.

Driver Nathan Ford sent the gelding around the field to challenge with a lap to go and when he released the brakes turning for home the horse left his rivals in his wake.

“That was awesome,” Ford said when he returned to the winner’s enclosure.

“I had another gear left so you’d have to say it was a very impressive run.” he said
Left Loaded’s trainer Steve Lucac said the gelding had done a great job this preparation but he always believed he would be a better four-year-old.

Listen to what trainer Steve Lucac had to say about Left Loaded’s latest performance – click here .