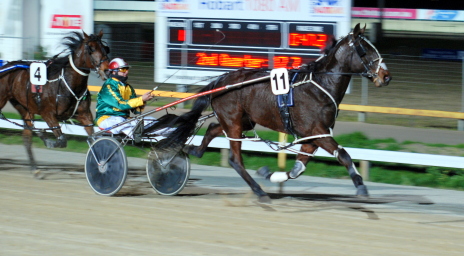 THE Rod Ashwood-trained Lickyalips staked his claim on the Big Park Stud Sweepstakes final with an effortless win in his heat over 1609 metres at Tattersall’s Park in Hobart tonight.

Lickyalips drew the outside of the second row but when driver Ricky Dugan opted to send his charge around the field soon after the start he caught his rivals napping and the gelded son of Royal Matjesty cruised to the lead.

The Rod Ashwood-trained gelding was never out of third gear and as it was his first run for over five weeks he understandably ran out of puff close to home, forcing Duggan to shake him up to keep his mind on the job.

Lickyalips hit the line 2-1/2 metres clear of Rykov Leis that trailed the winner throughout with Another Jasper doing his best work at the business end of proceedings to grab third but almost four metres astern.

Ashwood said Lickyalips was in need of the outing and will go into the final next Sunday week much fitter for the run.

Listen to what trainer Rodney Ashwood had to say about Lickyalips – click here.