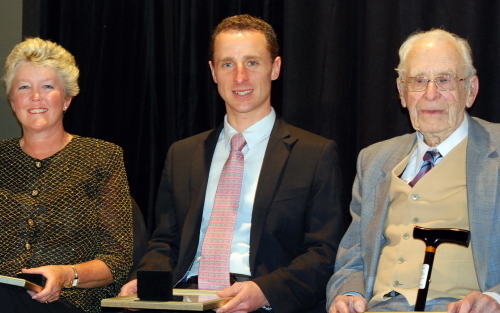 TALENTED sprinter-miler Life To The Full was last night crowned Tasmania’s racehorse of the year.

Life To The Full had a stellar season racing in three states and winning in two.

The David and Scott Brunton-trained gelding won the Newmarket Handicap and the weight-for-age George Adams Plate in Tasmania and across the water he scored an impressive win in the Pink Ribbon Cup at Caulfield.

Tasmanian Derby winner Geegees Blackflash, prepared by John Luttrell at Brighton, was named the state’s best three-year-old and the Michael Trinder-trained Strike The Tiger was named the top two-year-old based on his three outstanding wins for four starts that included the $150,000 Gold Sovereign Stakes.

An outstanding filly or mare award was added this year and the David and Scott Brunton-trained Lady Lynette was the recipient.

Paul and Elizabeth Geard who own Derby winner Geegees Blackflash were clear winners of the leading owner award.

Once again the Tasmanian Hall of Fame inductee ceremony proved popular with the 300 who attended the gala function at Tattersall’s Park in Hobart.

Walter McShane was a very popular induction in the trainer category while champion jockey Brendon McCoull also was a popular choice.

Former star mare Sunny Lane was a deserving induction with her owner Melinda Beattie making the trip from Queensland to accept the certificate of induction.

Clearly the most emotive of the inductions came when former jockey Max “Macka” Harris and racing stalwart Jim Osborne were called to the stage as inductees into the Associates category.

The Breeding awards were dominated by Grenville Stud’s West Quest that was the state’s leading Tasmanian-based juvenile stallion and the state’s best overall sire.

The industry participant awards also were presented with David and Scott Brunton accepting their prize for winning the trainer’s premiership.