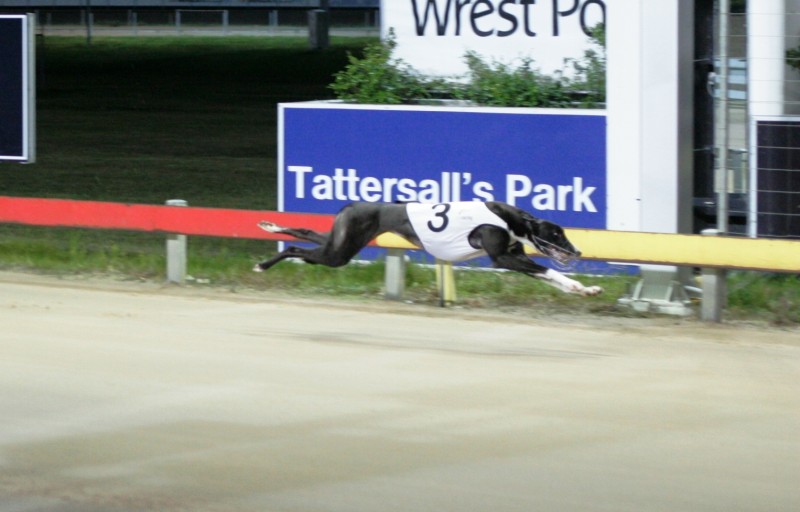 Lillycette staked her claim on her first feature when she scored an effortless win in the first heat of the Big Moose Laurels at Tattersall’s Park in Hobart last night. This daughter of Velocette trained by Ted Medhurst began like a bullet to lead easily and she was never headed setting splits of 5.11, 11.26 and stopping the clock in a quick 25.90 in only her third start in Tasmania.

She won on debut two weeks earlier and followed up with a second to Amazing Harry last week. While Lillycette was impressive, there also was a lot to like about the effort of kennel mate Get It Right that kept giving all the way up the home straight.

Wynburn Loco worked home well to secure a berth in the final while the race favourite Howzat Grace was slowly away and looked set to miss a final berth but she found a bit at the business end to grab fourth to make the final.

The Russell Watts-trained Ireland’s Force made her way into next week’s Laurels final with a terrific victory last night. Ireland’s Force was slowly away and buried deep in the pack heading to the top turn but with great track sense she found a passage along the rail when the leaders jammed up and went on to score comfortably from Kenny’s Cruise and Sweet Izzy that hit the line almost in sync.

Fantastic Nikita ran on to grab fourth after missing the trouble to scrape into the final while Soul Sister was clearly unlucky not to earn a final berth as she copped a severe check. Ireland’s Force time of 26.52 naturally would have been quicker with a clear run but nowhere near Lilycette’s (25.90).

Box Draw for the Laurels: