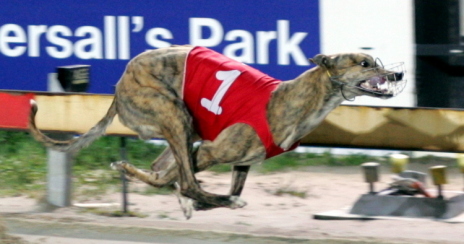 ASTUTE Victorian greyhound trainer Graeme Bate has enhanced his chances of capturing his firth Group 1 Hobart Thousand trophy with six of his best chasers to line up in heats of the 2011 Aceland Stud Hobart Thousand at Tattersall’s Park tonight (Thursday December 8).

Bate holds the record for preparing the most number of winners in the state’s only Group 1 race, which stands at four.

He has a runner in six of the eight heats and all but one, Allen Hertz (box 6) in the last heat, have drawn well enough to win their way through to the final that carries a purse of $75,000 to the winner.

Most of the half-dozen have been contesting the best races in Victoria with Shereen Bale the best performed.

She appears in heat seven (race 9) in which she has drawn well in box eight, a box from where she won a heat of the Melbourne Cup last month before going on to run second in the final to the in-form Dyna Tron, prepared at Anakie by Andrea Dailly.

Dyna Tron will start from box seven in the fourth heat tonight (race 6) and should he begin with them and avoid trouble he should make his way to his third successive Group 1 final having won the Melbourne Cup and last week was placed second to Glen Gallon in the Brisbane Gold Cup final.

Dyna Tron’s litter brother Dyna Bert will represent the kennel in the last heat (8) and is well served in box two.

Dyna Bert ran second to his better-performed brother in the Group 2 Geelong Cup on November 4 with Bate’s Shereen Bale third.

Another Victorian dog Compacto, prepared at Sale by Judith Risk, will tackle the second heat (race 4) but he is in one of the tougher heats.

Compacto opened his account in Tasmania with two wins at Devonport with his first outing at the expense of star local sprinter Damek.

The dog went on to win a heat of the Gold Cup before finishing second to Jenmar Joker in the final.

The only other interstate representative is Coal King that is trained in Queensland by Clifford Durrant.

Coal King will carry the green vest in heat 4 (race 6) that also boasts the presence of Dyna Tron.

While the interstate contingent is strong the local brigade is probably one of the strongest in years with Damek and his litter brother Decembrist, Hobart track record holder Bergermeister (Race 9) and his kennel mates New Recruit (R7), Wandy Neg (R8), Millie Grace (R10), Din’s Echo (R4) and to a lesser extent Loringo.(R6).

Add to the mix the in-form Centennial Bark from the Graeme Moate kennel; Maurie Strickland’s in-form Rewind, litter siblings Clyde’s Angel, Penny’s Angel and Miss Roman Nose from the Terry Penny kennel and we have the potential to produce an all-Tasmanian final.

The first heat (race three) is scheduled to start at 8.22pm.