Locals tune up for Hobart Thousand 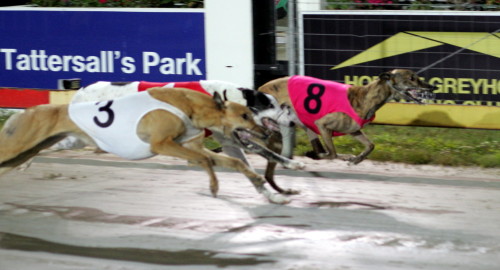 The Butch Deverell-trained dog relished wearing the pink vest and while there was a moment when it looked like he might not cross the red runner (Paragon Patch) he managed to find the fence.

Once on the lure he sped clear and had enough in reserve to score by a half-length from Accounts with Paragon Patch only a half-head astern.

Eagle Eye stopped the clock at 26.55, which was not a bad effort given it was an extremely rain-affected track.

He clocked 26.18 when he defeated CradocPark in Hobart three starts earlier and Deverell says the dog still has improvement in him for the Hobart Thousand series.

“The Hobart Thousand is the race he’s been set for so he can improve a bit on what he ran tonight in next week’s Thousand heat,” Deverell said.

“This dog loves racing and while some people might think he’s been over-raced, I know my dogs and this one just thrives on it (racing),” he said.

Eagle Eye has a good record from box eight on the Hobart track, having missed winning only once from five tries.

Deverell still rues the loss of his former kennel star Big Moose that was forced into retire after he broke down in a race in Hobart two months ago.

“When races such as the Hobart Thousand come around I really miss Big Moose but Eagle Eye is a pretty handy replacement,” he said.

Eagle Eye has an impressive record in Hobart with 10 wins and six minor placings from 21 starts.

While Eagle Eye was impressive, there was a lot to like about the run of Accounts that has been campaigning in Victoria.

Accounts was slow into stride from box three and copped a slight check approaching the top turn but once he got balanced he worked home well and will make his presence felt in his Thousand heat next Thursday night.

The MickStringer-trainedCradocPark also impressed with a win last night in a grade four event over 461 metres.

CradocPark began fairly from box five and ran a modest first split but he mustered speed to find the lead rounding the home turn and while ne didn’t streak clear, he held a decisive advantage over eventual runner-up Standan’Deliver all the way up the home straight.

CradocPark hit the line with almost a length to spare over Standan’ Deliver with Sheer Octane a close-up third.

Stringer was happy with the win.

“The dog has had a couple of little things go wrong of late and I wasn’t sure how he’d go tonight but he proved to me he’s back on track for a tilt at the Thousand,” he said.

“I had the Thousand mapped out for the dog some time back and to have him back in winning form on the eve of the series is great news,” he said.

“Magpie Lomar has loads of ability, so he just has to produce that in his heat and he also could be a finalist,” he said.

Little Spaniard suffered a torn Achilles early this year but has recovered to string a few wins together of late and he is back to defend his crown.

Topline Doovee has had no luck of late, including finishing unplaced in a heat of the Melbourne Cup.

She won the WA Oaks earlier this year and she was made a reserve in this year’s Top Gun.

The eight heats of the Hobart Thousand will be run next Thursday night with the $107,000 Group I final to be run a week later on December 17.