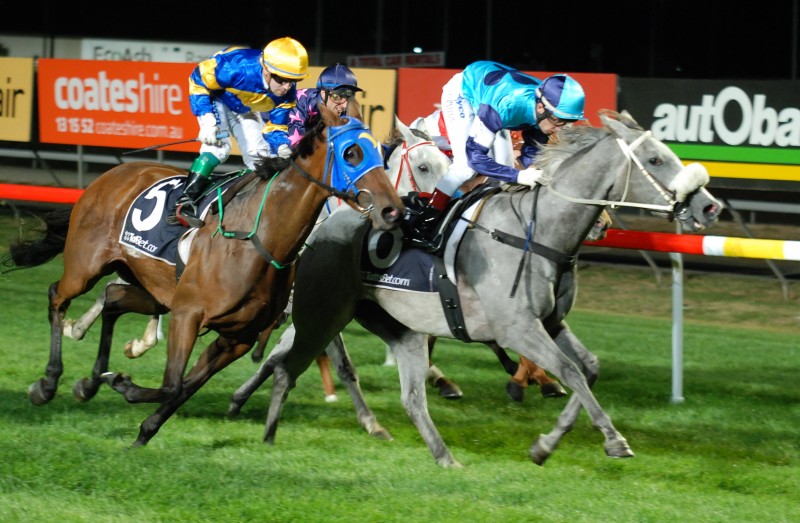 Underrated mare Lottie’s Lady broke through for an over due win when she led all the way to take out the Frank Feeney Benchmark 68 Handicap over 1420 metres at The TOTE Racing Centre in Launceston last night.

The Mark Ganderton-trained mare showed good early speed and rider Anthony Darmanin was happy to let the four-year-old  grey mare stroll to the front and once settled she held sway to the home turn.

When Devon Las arrived on the scene that mare appeared to have the leader’s measure but when Darmanin called on his charge for the supreme effort she dug deep and went on to defeat Devon Lass by a half-length with the winner’s stablemate Revenging a fast-finishing third.

ottie’s Lady’s trainer Mark Ganderton said the mare deserved the win and believes there more wins in store this preparation.

“This mare probably should have won one earlier in the prep,” Ganderton said.

“Tonight she had to do it at both ends of the race and I’m very pleased with the way she toughed it out,” he said.

Lottie’s Lady went into the race on the back of three thirds at her only starts this time in.

She is impeccably bred being by Dash For Cash from the Bel Esprit mare Witty Carlotta.

Ganderton said he felt sorry for reigning premier jockey Stephen Maskiell who had ridden the mare at her three previous starts this preparation but had to watch from the sidelines because of a suspension incurred lat week.