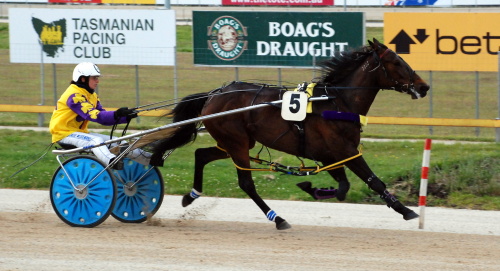 TALENTED four-year-old mare Loves A Beach made up for letting punters down at her previous start when she led al the way to easily win the tasracing.com.au Pace over 2090 metres at Tatttersall’s Park in Hobart tonight.

The Paul Belcher-trained mare resumed from a six-month spell with a decisive win in Hobart on November 9 but at her subsequent outing she was forced to do some hard work early and had to settle for a third behind Weemalanews in a C2-3 also on the Hobart circuit.

But with her regular driver Natalee Emery in the cart the daughter of Jennas Beach Boy-Perhaps Love showed plenty of early zip to cross to the front from gate five and led her rivals a merry chase.

Emery described it as a soft win but she believes the mare has a bright future.

Listen to what Natalee Emery had to say about the performance of Loves A Beach – click here .