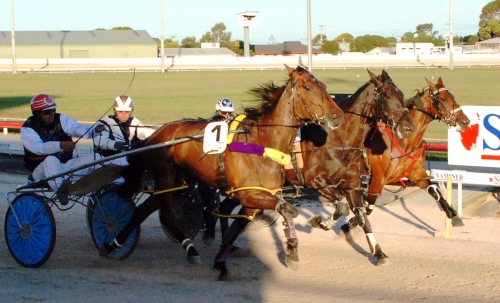 Loves A Beach powered home to win the $20,000 Lemonthyme Lodge Leigh Plunkett mares’ classic (2286m) to pave the way for a start in the rich George Johnson in Hobart in a fortnight.

Loves A Beach trailed the leaders to the home turn and for a moment looked sure to run a place at best.

But when driver Ricky Duggan eased her out three-wide on the point of the home turn and once balanced she sprouted wings to run down Ess Kay Precious and Love My Fella in the shadows of the post.

“I have said all along that this mare might measure up to the George Johnson and now it looks like she might get her chance,” Belcher said.

“This was a great win and the one that we were hoping for leading up to the George Johnson but we’ll wait and see what comes for the race,” he said.

Loves A Beach is raced by a syndicate of belcher’s friends but she is owned by Sydney businessman Paul Bisby who was trackside to witness the win.

Given the race was named in honour of Leigh Plunkett, it proved to be a heartfelt result.

Bisby explained that Loves A Beach was bred at Berriedale Stud and that he was a friend of Plunkett who suggested he lease the filly to Belcher.

“I didn’t know of Paul Belcher until Leigh said I should give the filly to him to train and lease out to a syndicate,” Bisby said.

“I had no idea he was so young (25) but I have been pleasantly surprised by the way he handles himself and his business.”

“He is the consummate professional and he is definitely wise beyond his years.”

“He’s placed the mare well and continues to do things to build the mare’s confidence,” he said.

Although Bisby lives and works in Sydney he has purchased a home in Tasmania at Westbury to where he and his wife will eventual retire.