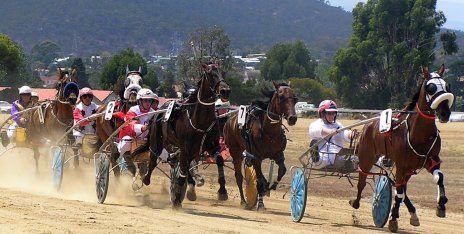 A SYNDICATE of 20 owners celebrated an overdue win when their injury-plagued five-year-old pacer Willie Winalot scored a well-deserved win in Carrick Roadhouse Pace at Carrick in the north of the state on Saturday.

Willie Winalot ($6.90) settled second and when drive r Damian Spring called on the gelding to make his charge he sped past the leader and went on to score by 10 metres from the $5 favourite Top Poppy with Bertils Rocket ($5.90) six metres astern.

It was a welcome change of luck for the owners, the Natural High Syndicate, and trainer Scott Woods who has had to nurse the gelding through a number of major injuries.

Woods said the horse suffered a serious tendon injury as a two-year-old.

“He injured his suspensory ligament as a two-year-old and spent about a year in the paddock,” Woods said.

Willie Winalot resumed and won a race at Devonport but a few months late broke his leg that threatened to end his racing career.

“He split a pastern bone that required three pins to keep it together.”

“The vet said he’d need six months off so we gave him a year.”

“He’s had no problems with the leg since the operation but we can just keep our fingers crossed,” he said.

It was the first leg of a winning double for Woods who also prepared Fierce Turbulence to win The TOTE Pace (1670m) by holding out race favourite Hilda Su in a close finish.

It was Fierce Turbulence’s first win in about 18 months.

Woods said his last double was in Hobart in May 2009 with Chriscott and Night In Vegas.