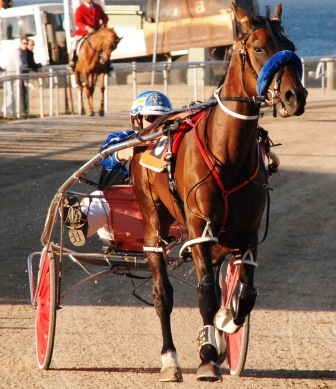 A change of luck and a cool drive from Claire MacDonald produced an overdue win for evergreen pacer King Albert in Launceston on Sunday night.

King Albert had been plagued by bad luck and poor draws in recent times but the nine-year-old gelding made the most of a front-row draw to cruise to a strong win in the Mitavite Claimer over 2200 metres.

Ulverstone-based trainer Rod Burgess said King Albert was “due to win one”.

“His trackwork in the week leading up toe race had been tremendous,” Burgess said.

“At his last run in Hobart he missed the start by a big margin but got beaten only nine metres going a rate of 2.02 and they ran home their last half (800 metres) in 58.2 seconds.”

Despite Burgess’s confidence King Albert went around at the lucrative price of $21.30 and defeated Mighty Aslan by a metre with odds-on favourite Maggies Son ($1.70) almost two metres astern.

King Albert faced the breeze for most of the race but defied the tough run to score comfortably.

There were big raps on King Albert early in his career but he never lived up to expectations.

King Albert (Albert Albert-Zensational x Stoneridge Scooter) has won 11 and notched 27 minor placings from 114 starts but most of his best form was at three and four.

He began his career in Victoria in the care of Grant Campbell but after one win he was despatched to Eric Jacobson in Tasmania where he made an impact winning three from his first five starts and ended the season with six wins and as many minor placings from 19 starts.

King Albert was claimed by Claire MacDonald and her husband Ron in June and this is the gelding’s second win for his new owners.