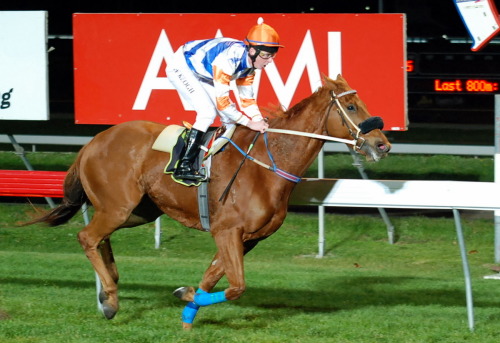 IRISH rider Ronan Keogh set his sights on wining the Tasmanian apprentices’ title and in Launceston on Thursday he made the most of a lucky break that netted him a winner to extend his lead in the race for the title.

Keogh snared a late pick-up ride on the Brendan McShane-trained Secdolrue in the Ballymore Stables Open Handicap over 1200 metres at The TOTE Racing Centre.

David Pires was to have ridden the gelding but when he advised he would have to side the horse a half-kilogram over connections opted to find a replacement rider.

Secdolrue came from well back to outgun race leader Centenary Diamond with Trysty a luckless third.

Despite having an outstanding record on the Launceston Strathayr surface, punters sent Secdolrue out at the lucrative price of $9.50, while a massive plunge late in betting saw Trysty shorten in to start the $2.00 favourite.

The winner’s trainer was thrilled with the win but admitted it was not unexpected, despite the gelding having finished well down the track at his previous outing in Hobart.

“We’ve realised that he doesn’t handle the Hobart inside track because it worries his knee,” McShane said.

Secdolrue took Keogh’s win tally for the season to 23 and four clear of his main rival James Riordan.