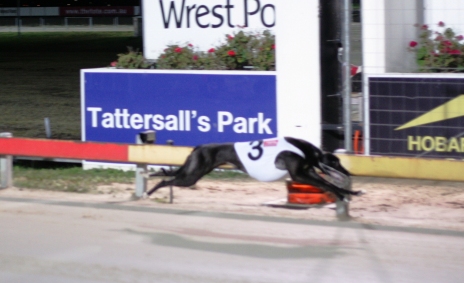 LIGHTLY raced pup Lucky Norris looms as one of the best on the card at Tattersall’s Park tonight.

The Tony Dawson-trained dog has had only three race starts for a win and a minor placing in a semi-final; of the Launceston Breeders Classic at his most recent outing last Monday night.

Tonight he steps from box two and should have enough early speed to find the lead and if that eventuates he is clearly the one to beat.

Modern Deal also is a nice type having won three of his 12 starts that includes a grade five in Launceston last Monday night.

Sultan’s Swing gets the chance to return to the winner’s circle (race 8) after failing at his most recent outing.

The Ted Medhurst-trained bitch has an imposing record of 22 wins and 13 minor placings from 45 starts and all she needs to do is jump with them to expand on her winning record.

Sultan’s Swing will wear the red vest and if she pings the lids and leads it will be all over by the time she hits for top turn.