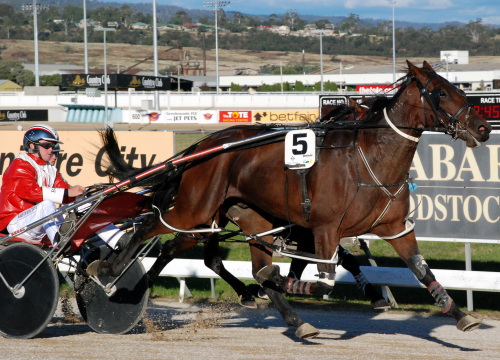 LUGOVOI LEIS returned to top form in Launceston on Sunday with an impressive win in the Sky racing 2 3YO pace over 2200 metres.

The Barrie Rattray-trained gelding settled last in the small field of six and at one stage spotted the leader and odds-on race favourite Jay Bardon ($1.60) 20 metres.

The gelding was still last on the home turn but when driver Gareth Rattray called on the son of Dream Away to extend he powered home to score convincingly from Jay Bardon with Karalta Lady a close-up third.

Lugovoi Leis was one of last season’s better-performed two-year-olds but had struggled to recapture his best form this time in.

However this latest performance would suggest the gelding will be very competitive in whatever he contests in the coming weeks and that could include the Globe Derby Stakes (sires stakes series).

Gareth Rattray was pleased with the gelding’s effort.

“He did a good job tonight but he has been coming along nicely of late and can only get better,” the driver said.

Lugovoi Leis is raced by his owner-breeders Trevor and Marjorie Leis.