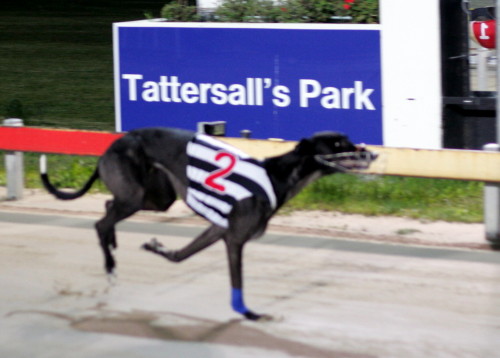 NSW trainer Ruth Matic is on a mission that she hopes will lead to her promising dog Hurricane Luke winning next month’s Group 1 Hobart Thousand.

Hurricane Luke made an impressive Tasmanian debut at Tattersall’s Park in Hobart last night with an emphatic win in an invitation over 461 metres.

It was his first look at the U-bend track but he was still able to clock 26 seconds and clearly the best of the night.

Matic has opted to travel to Tasmania early to get a head start on her rivals for what promises to be one of the best fields to tackle the state’s only Group 1 event at Tattersall’s Park on December 17.

Hurricane Luke arrived in Tasmania with a brilliant recent record of four successive wins, of which two were at Bulli which boasts a similar layout to the Hobart track.

It was the dog’s 11th win from only 18 starts but there is a reason why the dog is so lightly raced.

“Ï bred the dog and reared him for other owners and after he had two starts for them he was diagnosed with a broken stopper bone,” Matic said.

“I saw him trial before he raced and I was very confident he had above average ability.”

“When he broke the stopper bone and had the operation the owners weren’t prepared to go on with him so I got him back.”

“I’d had him about eight weeks before he won his first race for me and he’s just gone from strength to strength.”

“He loves the Bulli track and that’s why I decided to bring him for the Hobart Thousand because I thought he’d handle the Hobart track and I was right because he’s clocked 26 seconds at his first look and that’s encouraging,” she said.

Hurricane Luke has started the odds-on favourite nine of his 11 wins and even money the other two.

He was crunched late on the Tote last Thursday night firming from $2.70 close to jump time to start $1.70.

He jumped well from box two and after a stoush with High Choice (1) to the homer turn he burst clear and went on to defeat High Choice by 3-1/4 lengths with Hilton Sage a neck astern.

Matic said Hurricane Luke Premium Fantasy-Sophie’s Belle) has plenty of improvement in him and is looking forward to the Hobart Thousand heats in six weeks.

“It’s six weeks to the day to the Hobart Thousand heats so I’ll take him back tomorrow and then fly him in the day before the Thousand heats and depending how he goes we will most likely stay in Tassie until the final” she said.