Luttrell and Geards combine for double 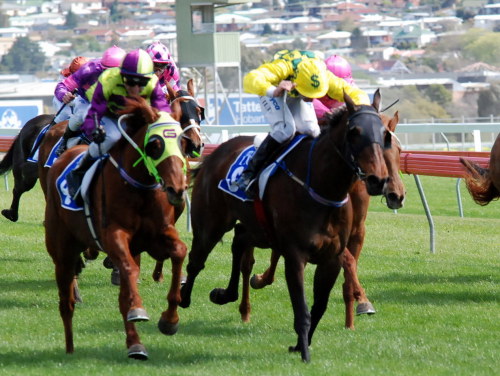 Pengalas Gee Gee, (Brendon McCoull) returned to racing from an 11 week spell and was heavily backed to start the $2.50 favourite.

He proved the money was spot on, as he charged late down the outside to win by a long neck in an 1100-metre maiden.

“It was a good win.” Luttrell said

“He probably shouldn’t still be a maiden”

“He ran second two starts ago to a horse that came out and won two in a row (Emerald Vale), which I thought he should have won. He is very honest horse and he tries really hard”

Luttrell believes the lightly raced son of Atlantis Prince has come back a better horse this preparation.

“All the Atlantis Princes need a chance to develop. We haven’t pushed him because of his size but he has had a little let up and has definitely filled out” he said.

Luttrell’s second leg of his double came in a race that was dominated by Geard-owned horses.

With four horses in the ten-horse field, the biggest problem for the owners was which one would perform the best on the day.

Eventually it was their five-year-old gelding Our Gee Gee that emerged triumphant.

Our Gee Gee (Eddie Brennen), also by Atlantis Prince, stormed home late over the 1600 metres to narrowly defeat the team Brunton-trained Phizup by a neck giving Luttrell his first double of the season.

“I wasn’t sure which one was going to do the best today. He (Our Gee Gee) had been getting close and we expected him to run a race,” said owner Paul Geard

Both winners were bred and broken in on the Geards property at Brighton.