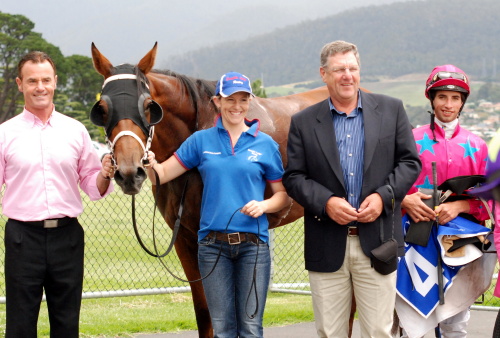 BRIGHTON trainer Gary White has his eyes firmly focused on the Tasmanian Guineas after his highly promising three-year-old Luzambo scored an impressive win against older horses in a strong maiden/class one handicap over 1600 metres at Tattersall’s Park in Hobart last Sunday.

Luzambo (Justin Hamer) defied a mishap soon after the start to defeat Uboa and Storm Flight.

According to jockey Hamer, Luzambo brushed his head on the barrier stalls at the start which forced his blinkers to be partially dislodged.

“The bridle was caught over the blinkers and he in effect raced with sight out of only one eye (near-side),” Hamer said.

“It was a terrific effort under those circumstances,” he said.

Luzambo won his maiden in Launceston over 1600 metres under lights on November 25 and he followed up with a game second to experienced mare Blue Bud in a benchmark 68 over 1550m last Sunday week (December 12).

In his loss to Blue Bud he was galloped on from behind and when he returned to the unsaddling enclosure his off-side back late was twisted at right angles.

White regards Luzambo as a serious racehorse and believes he can be competitive in the Tasmanian Guineas over 1600 metres on January 6.

Listen to what trainer Gary White had to say about Luzambo’s latest performance – click here .