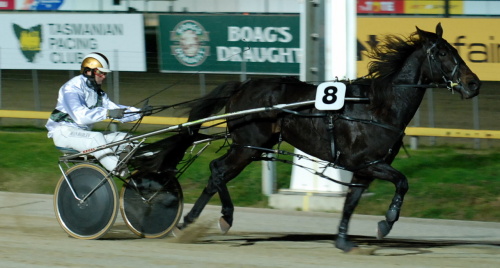 The Wayne Campbell-trained filly drew the inside of the second row in the $120,000 Betfair Princess of Pace but despite the tough draw she still managed to blitz a quality field and score by almost nine metres from Safina Leis and No Time To Dream.

Maggie Kennedy had been competitive in quality races leading up to the Princess of Pace and punters were happy to send her out the $1.40 favourite.

The filly settled well back in the field but as an opportunity arose driver Rohan Hadley seized the opportunity and the filly quickly moved into a winning position.

She hit the front at the top of the straight and careered away from her rivals over the concluding stages.

It was the filly’s fifth win of the season and her seventh career triumph.

Campbell said Maggie Kennedy would be aimed at a C2-4 race in Launceston as her next mission and then be set for the Bandbox Stakes; the Tasmanian sires stakes for 3YO fillies.

“This filly has done a terrific job so far and provided she pulls up well from this run, as I expect she will, then we’ll push on to the Bandbox,” Campbell said.

“I’ve had a lot of horses over the years that have returned very little so it’s nice to finally get one that has above average ability and gives us a lot of joy,” he said.