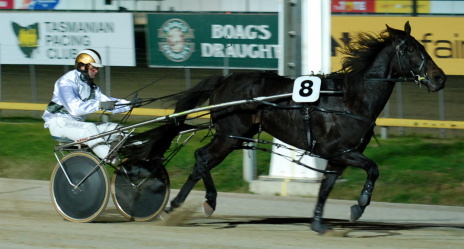 One of last season’s top three-year-old harness racing fillies Maggie Kennedy will be out to resurrect her career in the Westbury Pacing Cup at Carrick Park today.

Maggie Kennedy notched her first win of the season at her eighth attempt and at her first try on the Carrick track two weeks ago.

She was driven by Ricky Duggan last start and he has a perfect strike rate on the Wayne Campbell-trained four-year-old winning at all four starts with him in the cart.

Maggie Kennedy won seven and was placed four times from her 14 starts last season but she has taken a while to come to hand this time in.

The daughter of Courage Under Fire will have to be on her game today as the opposition is reasonably strong and she will start off a 10-metre handicap.

The pole marker Celtic Legend is a winner of two of his past three starts and all from a standing start while In Cruise Mode has been runner-up at his past two in similar or better company.

But if Maggie Kennedy steps cleanly and finds no trouble in the race she should be too good for her rivals.