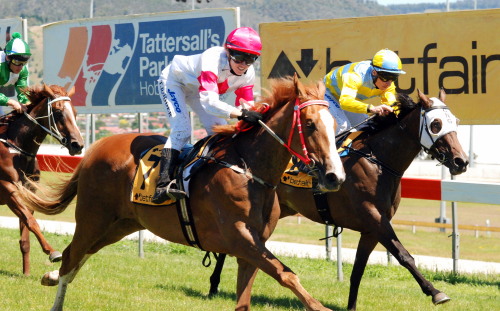 LONGFORD trainer John Blacker has set his sights on the Magic Millions 2YO with his promising filly Millie’s Reward following her impressive win at Tattersall’s Park in Hobart this afternoon.

Millie’s Reward came from well back in the field to score from the fast-finishing MossgeilVillage with race leader Slip To The Moon hanging on for third ahead of Serpent View.

Millie’s Reward was well ridden to apprentice Talia Rodder who had her settled beyond midfield and then weaved a passage through the field to john the leaders 200m out and then staved off a late bid from MossgeilVillage.

Rodder said it was a top effort by the filly.

“She handled the going that varied a lot down the back straight and then she really toughed it out to win. She has a future,” Rodder said.

Listen to what trainer John Blacker had to say about Millie’s Reward’s first win – click here .