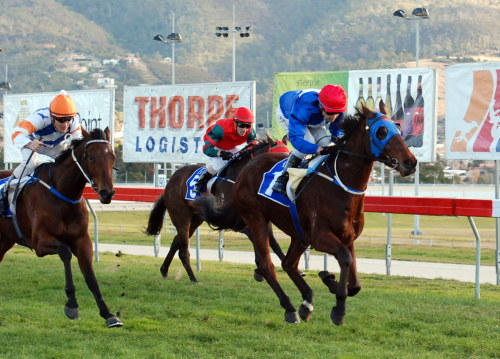 TOP trainer Charlie Goggin has labelled his well bred two-year-old I Am Magic’s win in Hobart yesterday as a “bonus”.

I Am Magic led all the way to win the Ross Fouracre Handicap and survived a two-pronged protest to ad interest to the event.

The Magic Albert gelding scored by three-quarters of a length from Incat (Michael Guthrie) with Brief Ernest two lengths astern and just in advance of Titus Flavius.

It was I Am Magic’s sixth start of what has been an interesting season for the gelded son of Magic Albert-Miss Schumann.

“He was placed in a Listed race (Elwick Stakes) over the summer and then we had a problem getting him a start as he was being balloted out of races but this win is a bonus because he is a typical Magic Albert and they don’t usually sow their best until they’re at least three-year-old,” Goggin said.

“He showed enough to suggest he might win one or two as a two-year-old so we pushed on with him.”

“He might have one more start and then be tipped out for a spell,” he said.

The protest was lodged by Michael Guthrie the rider of the runner-up Incat.

Guthrie claimed I am Magic’s rider Stephen Maskiell slowed the tempo of the race to a ridiculously slow pace once he assumed control which forced Guthrie’s mount to over race and almost clip the heels of the eventual winner on numerous occasions from the 1000m to the 600m.

The second part of the protest was in the home straight with Guthrie alleging I Am Magic’s racing manners in shifting off the fence towards the middle of the track especially over the last 200 metres forced his horse to change course.

Guthrie and Incat’s trainer Mark Ganderton believed the slowing of the pace and the interference in the home straight cost Incat at least three lengths.

The protest was dismissed but stewards dealt with the issue of Maskiell slowing the tempo of the race at a hearing at the end of the meeting.

I Am Magic is owned and raced by a syndicate put together by Prime Thoroughbreds boss Joe O’Neill and one of the syndicate members, Cameron Day, was there to see the win.

“We have always believed he would win a two-year-old so we are very happy with today’s result,” Day said.

“Having to survive a protest was a bit nerve wracking but it all ended well,” he said.

Day said the syndicate is excited about the prospects of I Am Magic’s yearling half-sister Another Concerto (x Snippetson) that has broken in well and she could be an early two-year-old.