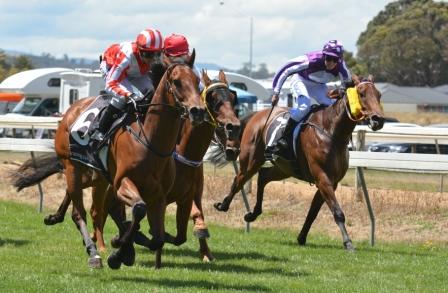 MANY years ago it was not uncommon for thoroughbreds to race twice at the same meeting but from the early 1970s the practice was phased out.

But at Longford yesterday local trainer John Blacker almost revived it when he presented his three-year-old Magnasa in a maiden (1400m) less than 24 hours after the gelding competed in a race at The TOTE Racing Centre in Launceston.

Magnasa went around one of the favourites in a maiden over 1600m at Mowbray at around 6.15 pm on Wednesday night and at 2.35 pm yesterday afternoon the same horse stormed home to win the Incitec Pivot Maiden over 1400 metres.

Magnasa emerged triumphant over Anytime Soon and Lost My Patience.

Blacker was delighted with the result but said it was not something he would consider for just any horse.

“I was in two minds about which race to run the horse in so we opted to run at Mowbray where he just failed to run the trip (1600m),” Blacker said.

“But he pulled up so well and ate up that night I decided to let him go around today.”

“The horse proved me right and he pulled up great.”

“You wouldn’t normally run a horse in two races less than a day apart but he was on his home track and only had to walk out of his box into the race day stall so there was no traveling to tax the horse,” he said.

Magnasa (Magnus-Nova Rosa) is raced by the trainer, his life partner Penny Cawthen and the Nova Clause Syndicate.