Magnetosphere ends campaign on a high 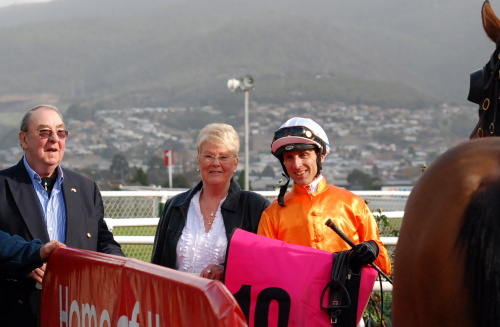 SMART two-year-old filly Magnetosphere will head to the spelling paddock for a short break following her impressive win in a maiden 2YO race over 1100 metres at Tattersall’s Park in Hobart last Sunday.

Magnetosphere (Brendon McCoull) was having her third start in Tasmania with her previous two attempts game seconds behind star juvenile Socks.

The Tasmanian-owned filly was dropping back from 1400 metres of the Sires Produce Stakes but she handled it with consummate ease.

“This filly began her career in South Australia with David Hayes and she had two thirds over there before being relocated to Victoria where she notched three thirds before coming to Tassie,” Campbell said.

“She had the misfortune to run into Socks at her first two starts here in Tassie so this was probably a deserving win given her good form,” he said.

Magnetosphere is owned by her breeders Barry and Enid Larter who have been racing and breeding thoroughbreds for about four decades.

Barry was responsible for bringing top sire El Moxie into the country, standing him at his Woodlawn Park Stud at Swan Bay.

El Moxie is probably best known as the sire of champion Hong Kong sprinter Silent Witness who was considered the best in the world at his prime about four years ago.

Larter said Magnetosphere would head back to Vitoria for a spell but would continue her racing career in Tasmania.

“This filly is definitely a Tasmanian racehorse now. The bulk of her remaining race career will be spent in Tasmania, although she might have the odd run in Victoria at the start and or the end of some preparations,” Larter said.

Campbell and Larter were once considered a formidable combination, having enjoyed a lot of feature race successes with horses such as Alfa, El Mirada and Castlegayle during the 1990s and early this millennium.

Campbell said Magnetosphere (Al Maher-Magnetic Force) was a welcome addition to his stable and suggested she would be back racing in November with the 3YO Cup as a likely first-up mission.