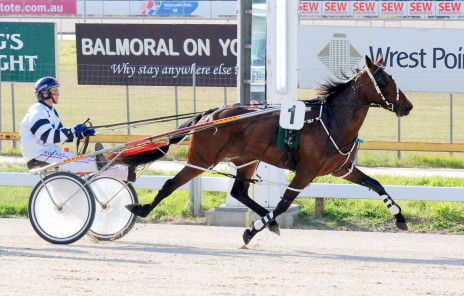 PROMINENT harness racing owner Mick Filluel had a lot of success with New Zealand –bred pacer The Music’s Over but about a month ago he opted to pull the pin.

It looked as if the nine-year-old’s racing career was about to end but the gelding’s trainer Tim Maine accepted an offer from Filluel to take the horse and keep racing him if he so desired.

At the TOTE Racing Centre in Launceston last Sunday night The Musics Over scored an all-the-way win in the Bullock Consulting Claimer over 2200 metres and at the juicy odds of 20-1.

“Mick gave up on him about a month ago but he told me I could take him if I wanted him so I thought I’d have a go and keep him racing for a bit longer,” Maine said.

The key to any success was to try and source a suitable race and last Sunday night’s assignment looked ideal.

“That race is about his level these days.”

“He’s getting old and his legs are not the best but these claiming horses are a pretty even bunch and usually whatever gets the best run in the race wins.”

“If you get the lead in a race, they don’t often take you on,” he said.

The Musics Over is reasonably well travelled but his record says he has been a good money-spinner for his former owner.