Major Mac back on track 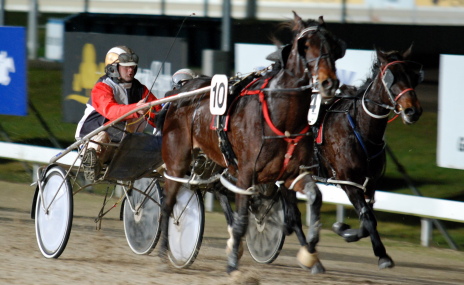 A RUNAWAY win in a C0 race over 2200 metres in Launceston last Sunday night has convinced Major Mac’s trainer Rod Plunkett that the gelding may yet realise his full potential.

Major Mac arrived in Plunkett’s stable from Victoria in February last year to tackle the Tasmanian Derby in which he finished seventh behind Thats So Irish.

Plunkett took over the training of the now four-year-old and the gelding won his two three-year-old races before being tipped out for a two-month spell.

He resumed at the end of July in a C0 in Hobart and was placed third but two subsequent outings in three-year-old events proved fruitless.

“I had a couple of problems to iron out but I reckon he’s back on track to there I want him to be,” Plunkett said.

“I thought I had a good horse so I gave him a break but I’ve hade nothing but trouble with him ever since.”

“He hurt himself in the stalls at his last run here in Launceston (in July) and twisted his pelvis.”

“I’ve had the chiropractor and vet working on him and he’s coming right but he’s still not 100 per cent,” the trainer said.

Major Mac (Elsu-Penultimate) began his career in Queensland where he won his first two starts as a 2YO while in the care of Luke McCarthy.

He was prepared by John Justice while campaigning in Victoria but his only two wins with that trainer were at Bendigo and Shepparton.

Plunkett says Major Mac still has a few little chinks in his armor but expects to have those sorted out this preparation.

“He’s pulling a bit and is still a bit touchy going to the gate but hopefully we’re on the right track and will have that all sorted out soon,” he said.

Last Sunday night Major Mac was driven confidently by Craig Toulmin who sent him around the field 1500 metres out to find the front and from there on it was a procession.