Make way for the Pony Express 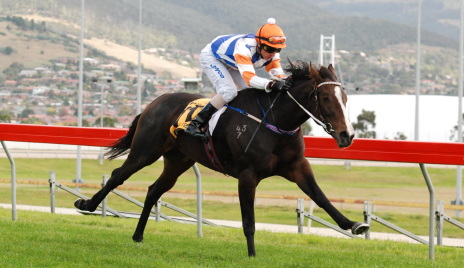 IT took patience and hard work to get well bred filly Pont Express to the races but it all paid off at Tattersall’s Park in Hobart on Sunday where the filly scored an impressive debut win in the EP Wilson maiden over 1100 metres.

With top rider Brendon McCoull in the saddle, Pony Express made light of a wide barrier to slot into third spot after travelling 250 metres and when McCoull asked her to extend turning for home she quickly hauled in the leaders and went on to score a comfortable win over Suspicious Gee Gee with Legal Lord a game third.

The filly’s trainer Mark Ganderton said it was an expected win but confirmed it had been a chequered path to her first race start.

“She is a half sister to another good horse I train Outlaw Oakley that won on debut, so the family can run a bit,” Ganderton said.

Tismore’s Gee Gee set a solid pace with Legal Lord at its girth to the home turn.

Legal Lord hit the front at the top of the straight but he was a sitting duck for the swoopers.

Listen to what trainer Mark Ganderton had to say about the debut win of Pony Express – click here .