Mary had eye for smart one 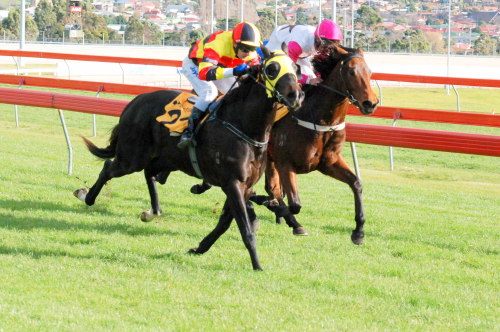 WHEN Mary Ryan won $8000 on Tattslotto about two years ago she travelled to Melbourne with her trainer husband Bill to look at a weanling that took her eye in a catalogue.

The Ryans raced and trained smart sprinter Colonel Parker and the weanling was out of his sister Too Many by US stallion Artie Schiller.

Mary liked what she saw and purchased the colt for $8000 and at Tattersall’s Park in Hobart today she was repaid when Smartie Artie scored an impressive win in the Schweppes Maiden Plate over 1100 metres.

That race experience proved invaluable as he settled better this time to race in third spot behind the leaders and when rider Kelvin Sanderson eased him out to challenge he let down like a goods horse.

Listen to what trainer Bill Ryan had to say about Smartie Artie’s maiden won – click here .