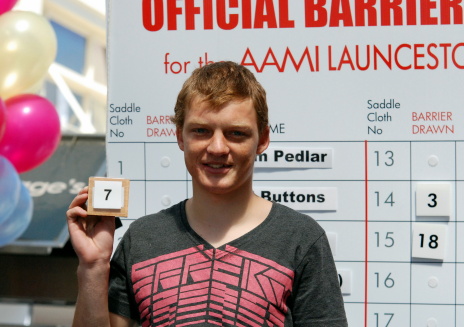 STAR Tasmanian jockey Jason Maskiell can’t remember much about Thursday night’s meeting in Launceston after suffering severe concussion from a race fall a half-hour after he partnered La Fantastique to victory in the Tasmanian Oaks.

Maskiell was rendered unconscious when his horse Idolised fell on the home turn sending the 20-year-old rider crashing to the turf where he lay motionless for about four minutes.

He regained consciousness and was later taken by ambulance to the Launceston General Hospital as a precautionary measure.

After being dismissed from hospital about 4.30am yesterday morning he headed to his parent’s home at Longford to relax for a few hours before making his way into Launceston’s city centre at noon to participate in the official barrier draw for next Wednesday’s AAMI Launceston Cup.

When Systreamer’s name was called by the barrier draw host, Maskiell strolled to the stage to select a replica cup under which was pasted a number that signified the barrier from which his horse would start.

He ended up with barrier seven and he was thrilled with his choice.

“I was hoping to draw anywhere between two and eight so seven is pretty good,” Maskiell said.

His recollection of the previous night’s racing was, in his terms, “”fuzzy”.

“Everyone keeps telling me I landed with a great thud and the way I feel today I reckon they are right.”

Maskiell was supposed to ride at Moonee Valley last night (Friday) and at Flemington today but he was too bruised and sore to fulfil those riding engagements.

“I’m staying here in Launceston until Cup day so I will be right next Wednesday,” he said.

For the Launceston Cup field with barriers – click here .

Listen to what Jason Maskiell has to say about his fall on Thursday night – click here .

Story and photo By Peter Staples.