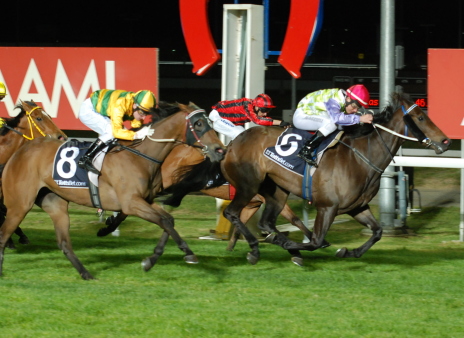 JOCKEY Jason Maskiell is expected to appeal against a six-meeting suspension meted out by stewards over one of his rides in Hobart last Tuesday.

Stewards suspended Maskiell over his ride aboard Storm Cell in a class one handicap in which it is alleged he failed to take all reasonable measures to win or obtain the best finishing position possible on the gelding.

The detail of the charge is that he failed to use adequate vigor to take a run between two horses over the final 100 metres of the race.

Maskiell had Storm Cell placed midfield and in the home straight he was searching for a run.

Instead of trying to take the run, Maskiell appeared to ease his charge and was unable to be ridden out to the line.

Stewards said the run was available for Maskiell to take for “six to seven strides”.

While Maskiell considers whether or not to appeal, apprentice Bulent Muhcu will be out for three meetings starting from the conclusion of today’s Hobart meeting.

Muhcu was suspended for three race dates for careless riding at the same meeting.

Another two jockeys, Anthony Darmanin and apprentice Erhan Kacmaz were suspended as a result of incidents at the meeting in Launceston last Wednesday night.

Darmanin copped one meeting for an indiscretion and he chose to serve out his suspension immediately, while Kacmaz, who was outed for three race dates, opted to fulfill his riding engagements at Tattersall’s Park in Hobart today and will start his suspension after next Wednesday night’s meeting (November 28) in Launceston.