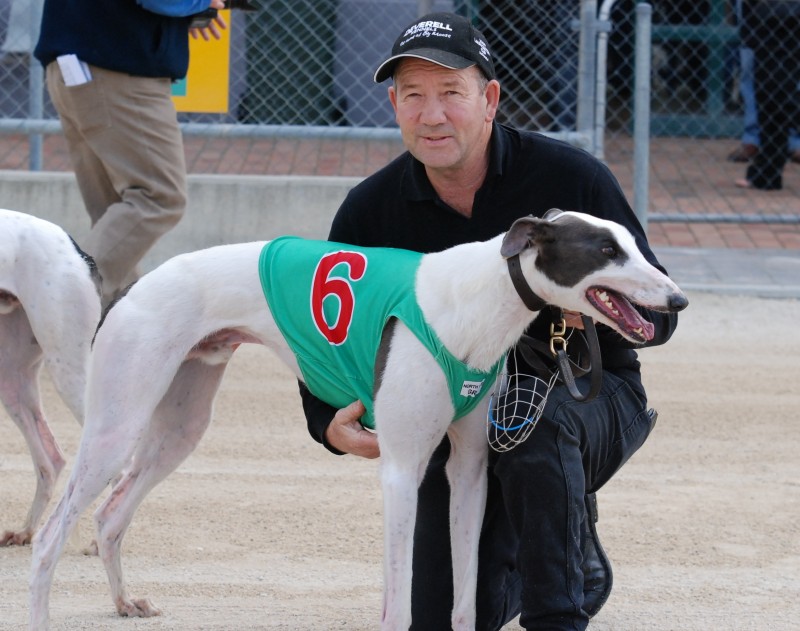 CHAMPION Tasmanian greyhound Rewind had his colours lowered at Devonport today by a young pup that looks set for a bright future in Tasmania.

Rewind was coming off a record-breaking win at Devonport last week but it was Mat’s Entity that gave his rivals a galloping lesson despite wearing the green vest.

Last week Rewind won his 55th race to snare the record for the most number of wins by a greeyhound in Tasmania.

The Butch Deverell-trained and owned dog made it four wins from five starts on the track and while his time of 25.92 over the 452-metre trip was not a personal best it wasn’t far off.

Frytson showed his customary early speed to lead from box one but Mat’s Entity (Vee Man Vane-Top Entity) had him covered near the home turn and went on to score by 1-1/4 lengths from Seagull’s Boy with Painted Amigo (8) almost two lengths away third.

“I bought this dog from NSW where he had won three from three over short distances and he showed us a lot from day one here in Tassie,” Deverell said.

“He can run brilliant sectionals but if I can get another 10 strong metres out of him he’d be like Pharlap.”

“I’ll just keep bobbing along and try to build his stamina but irrespective he is a talented dog and is doing a great job because he is still only a 22-month old pup,” Deverell said.

Mat’s Entity has had only eight starts in Tasmania for five wins and two minor placings for about $8000 in stakes.

Deverell said Matt’s Entity will be back in Devonport next week to contest a heat of the Country Derby.