Mawingo on parade at Grenville tomorrow 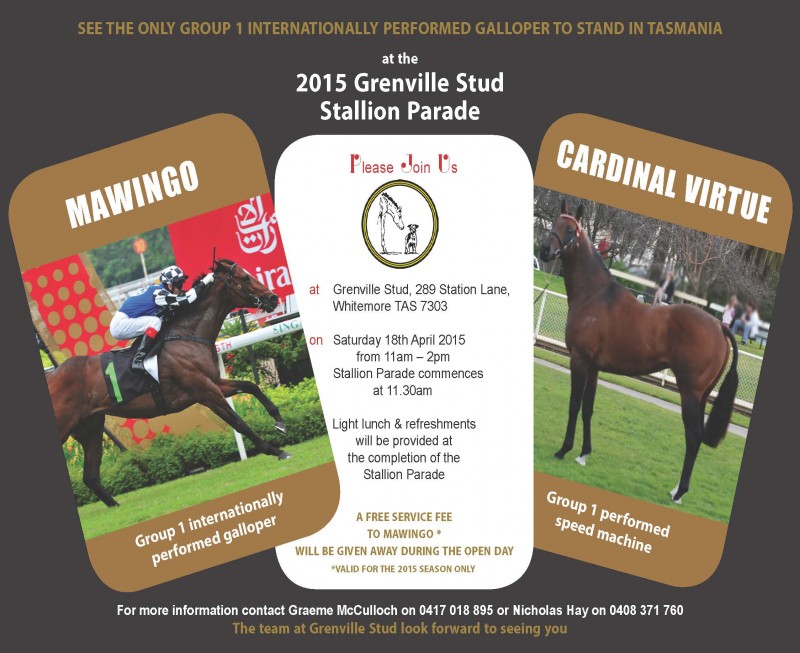 GRENVILLE STUD at Whitemore will host a stallion parade tomorrow (Saturday) featuring new arrival Mawingo as well as Cardinal Virtue that has been standing at the stud for the past two seasons.

Mawingo, is the first international Group 1 winner to stand in Tasmania and is an exciting addition for the Tasmanian thoroughbred breeding industry.

Purchased by Australian Bloodstock, the German-bred son of Tertullian was a Group 3 winner of the Munich Bavarian Classic (2000m) as a three-year-old.

On arriving in the southern hemisphere, Mawingo entered the stables of Anthony Freedman where he won at his first start for that stable over 1600m at Flemington.

Mawingo returned in the autumn of 2013 and produced an exciting first-up run in the C.F. Orr Stakes (1400m) behind Black Caviar’s younger sibling All Too Hard.

After the close-up second jockey Craig Williams was quoted “He showed amazing speed and with any luck at all should have won”.

Some say this race was the strongest ever Singapore Cup. Mawingo raced again in Singapore and won a 1600m race before injury forced his retirement.

Australian Bloodstock’s Jamie Lovett who acquired Mawingo from Europe was impressed with the horse’s superior turn of foot and relaxed temperament.

Both horses will be paraded and Grenville Stud has donated a service fee to Mawingo for the 2015 breeding season which will be given away during the stallion parade.

Be at Grenville Stud at 289 Station Lane, Whitemore with the event to be staged between 11.30 am and 2 pm.

Light lunch and refreshments will be provided at the completion of the Stallion Parade.