Mawingo to stand at Grenville Stud 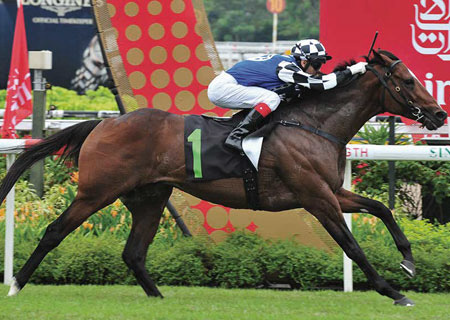 Mawingo was a high class, tough and versatile racehorse, he was an outstanding weight-for-age galloper and will be the first Group 1 winning international galloper to stand at stud in Tasmania.

Mawingo showed a great turn of foot bursting through a gap to win the Gr.1 Doomben Cup (2000m), however, Mawingo’s most notable performance in Australia was running an unlucky second in the weight-for-age Group 1 C.F. Orr Stakes (1400m) behind All Too Hard.

“He showed amazing speed and with any luck at all should have won” – jockey Craig Williams said after the C. F. Orr Stakes.

In addition to the success achieved in Australia, Mawingo was also a Group 3 winner in Germany and a winner in Singapore over 1600m as well as finishing third in the Group 1 Singapore International Cup.

At one point in his racing career Mawingo was rated the 12th best stallion worldwide to still be racing, testament to his worth on the racetrack.

Mawingo’s pedigree is one of considerable depth.

A son of highly successful Mr Prospector stallion Miswaki, Tertullian is a three-quarter brother to Urban Sea, a sensation both on the track – winning the Group 1 Prix de l’Arc de Triomphe – and at stud, producing the champion racehorses and outstanding stallions Sea The Stars and Galileo.

“He is a lovely stallion with great conformation and an excellent temperament,” McCulloch said moments after Mawingo settled into his new home at Grenville.

An open day will be held a Grenville in April for breeders to view Mawingo and the stud’s other high-profile stallion Cardinal Virtue.

Mawingo will stand his first season at Grenville for $4,400 including GST.