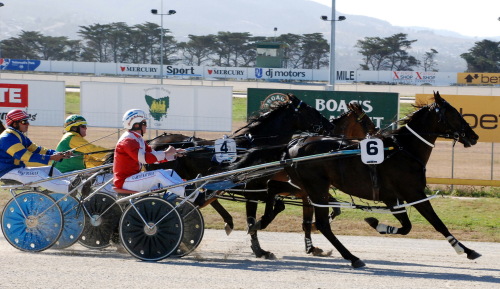 Biggernbettermax scored his first win in over a year when he bounced back into the winner’s circle with a first class performance in the J Boag & Son Pace over 2200 metres at The TOTE Racing Centre in Launceston on Sunday night.

Longford trainer Barrie Rattray had a big opinion of Biggernbettermax last season and he had no hesitation in rating him one of the state’s best two-year-olds.

After three starts the gelding had two wins and a luckless second to his credit, with his win in Hobart arguably his best.

Biggernbettermax suffered a small nick in his nearside back leg and while it looked harmless enough at the outset it almost ended his racing career.

“We’re not sure how he did it but the cut was deep enough to nick his tendon sheath and all the fluid drained out,” Rattray said.

“At one stage it was tough and go as to whether he might ever race again.”

“But we persevered and we’ve got him back racing,” he said.

Biggernbettermax resumed racing with a game third in Launceston and on Sunday showed the benefit of that outing by dispensing with his rivals with consummate ease.

With Gareth Rattray aboard, the gelding led from gate one and had plenty in reserve when challenged strongly at the business end of proceedings to hold out the fast-finishing Cardinal Tucker by three metres with Peace Chief an encouraging third over two metres away.

Rattray said he will take things slowly with Biggernbettermax.

“There are no special plans for the horse in the short term but hopefully we can look at some nice races further down the track,” the trainer said.

Biggernbettermax is raced by the trainer in partnership with Ian Dunham who has not been in the best of health lately.

“I’m hoping this win will be a good for Ian (Dunham) who has been battling ill-health in recent times,” he said.