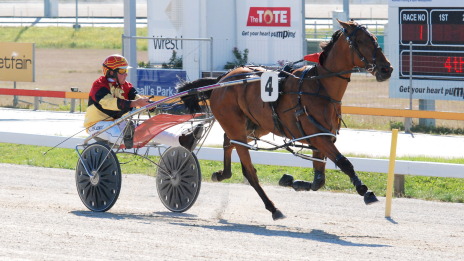 ONE of Tasmania’s most prominent harness racing owners Mick Maxfield celebrated his first win as a trainer when Driller Mac led all the way to take out the Prince Nijo Stakes for three-year-olds at Tattersall’s Park in Hobart on Sunday night.

It was an effortless win by the gelded son of Art Major at what was his second start this preparation.

The gelding resumed with a luckless sixth in Hobart on January 8 but on Sunday night with Paul Ashwood in the sulky he toyed with his rivals to score by seven metres from Margin Girl with recent New Norfolk winner Cesta La Vie 7-1/2 metres away third.

Driller Mac was purchased by Maxfield at the Melbourne Premier Yearling sale and he looks set to live up to the promise he showed in his first season of racing.

Maxfield has enjoyed a lot of success over the years and he has turned over a lot of trainers at his training complex at Port Sorell.

He has held a trainer’s licence for about 14 months but this is the first time he has stepped out on his own with the entire team of 14 horses.

He says he still relies on advice from many people but he is relishing the new challenge.

Listen to what trainer Mick Maxfield had to say about Driller Mac’s latest win – click here.