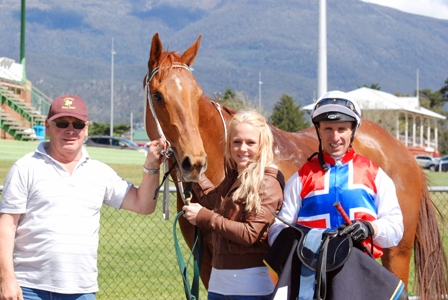 PREMIER jockey Brendon McCoull is a good judge when it comes predicting the future of young horses and he gave Flight Mode a glowing report following the gelding’s maiden win over 1000 metres at Tattersall’s Park in Hobart today (Sunday).

Flight Mode (Helike-Miss Meerkat) debuted with an eye-catching fifth of 12 in Hobart two weeks ago but back to a smaller field and withy that experience behind him the flashy chestnut gelding proved too good for his rivals at the business end of the race.

He settled just behind the leaders to the home turn and when he was eased off heels to challenge he let down well, although he had a tendency to lay in all the way up the home straight.

Flight Mode hit the line almost a length clear of the fast-finishing Miss Che Che with the well-backed Jilly Babe three lengths away third and just in advance of race leader Zigplosion.

Flight Mode is trained at Seven Mile Beach by Tegan Keys and owned by her father John in partnership with M Carter, Earl Sakareassen and A Keys.

“This was my first time on the horse but he gave me a good feel going around to the barriers and they had him well and he pretty much won accordingly,” McCoull said.

“He did a few things wrong like laying in all the way up the straight but he still won with authority despite doing those things in the race.”

“I think he is a very nice horse with a bright future,” he said.