McCoull strikes on first day back 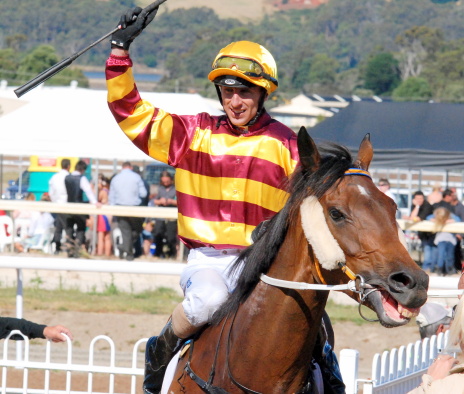 MULTIPLE premiership-winning jockey Brendon McCoull celebrated his first day back in the saddle with a double at Tapeta Park Spreyton today.

He scored a stirring win aboard Lottie’s Lady in a class one handicap over 1150 metres and stablemate Copper Dancer in the final race on the eight-event card.

McCoull has been sidelined with a broke collar bone and fractured shoulder blade for almost three months.

He warmed up with a minor placings aboard the Bill Ryan-trained pair of Moments Like This and Speed Control, both of which ran third in their respective races.

But it was vintage McCoull aboard Lottie’s Lady. he had the Mark Ganderton-trained mare settled just better than midfield on the rails and travelling sweetly to the home turn.

He eased the Dash For Cash filly off the fence approaching the home turn and when the gap appeared in the home straight powered home and edged out the fast-finishing Tap It In and Southlander with Bazanne a centimetres away fourth.

It was Lottie’s Lady’s first start since finishing down the track on Devonport Cup day (January 11) in a class one.

The three-year-old looks to have a bright future with the potential to excel over more ground (1400-1600m).

Copper Dancer was sent out an odds-on favourite and while at one stage looked to be struggling to gain a run, McCoull weaved his magic and aimed her at gaps nearing the home turn and she finished off well to win with something in hand.