McDonald out to create history 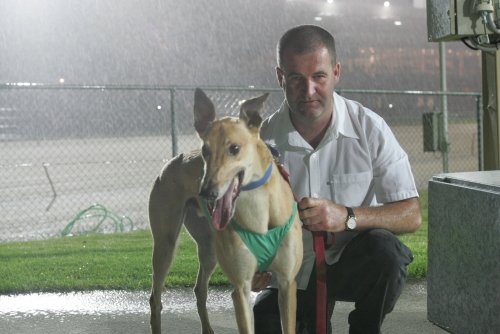 TOP Victorian greyhound trainer Darren McDonald will create history if one of his two finalists can emerge triumphant in Thursday night’s Group 1 Hobart Thousand final at Tattersall’s Park in Hobart.

McDonald has already prepared Gardam Prince to win the Group 3 Devonport Cup and Group 2 Launceston Cup this year and needs only to snare the Hobart Thousand trophy to grab all three majors in the same year, a feat never before achieved.

McDonald has one of the favourites Octane Show and the well-performed Perfect Fancy in the final and both have drawn ideally with Octane Show to start from box six, the same alley he had in his heat, while Perfect Fancy will wear the check vest (2).

McDonald is quietly confident either Octane Show or Perfect Fancy can deliver him his first Hobart Thousand trophy and bring to an end a decade-long quest to win the race.

McDonald has tried to win the Hobart Thousand with many class acts including champion Brett Lee that had his colours lowered by local dog Top Shiraz.

Local champion Damek had his track record (25.79s) bettered by Octane Show that clocked 25.75s in winning his heat and Melbourne Cup placegetter Dee Winter also bettered Damek’s record when he stopped the clock at 25.78 in his heat.

While Damek’s record was bettered by two of the finalists, pre-post markets still have him favourite at 9-4, just in advance of Octane Show at 5-2 and Dee Winter next best at 4-1.

Damek will start from box four, while his litter brother Decembrist will carry the pink vest (8) with the other local finalist Octane Assassin to start from box three.

The final will be run at 9.44pm with Sky Channel to provide a live hosting from the track with Peter Staples as host on Sky 1.