McLeod chimes in with timely win 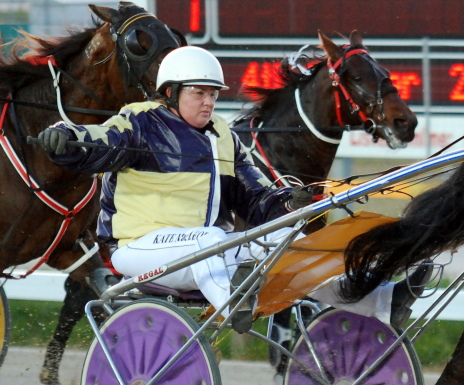 UNDERRATED harness racing trainer-driver Kate McLeod has the knack of winning aboard outsiders and in Launceston last Sunday night she was at it again, much to the displeasure of favourite backers.

McLeod partnered her five-year-old mare Why Take Time ($32) to a last-stride win in the Mitavite Pace over 2200 metres.

Why Take Time gave the leaders a big start as she was still last on the home turn and even the mare’s trainer-driver thought winning was out of the question.

But the mare came with a wet sail in the home straight to get up in the last few bounds to defeat Terrorcam ($5.10) by a head with favourite Grand Passion ($2.40) over two metres astern.

It was almost a mirror image of her previous win.

“If she is to show her best she definitely needs races run to suit,” McLeod said.

“We were still near last on the home turn and t be honest I never gave her any chance of winning but she tracked into the race nicely and when she sprinted she flew home and we got up in the last few strides.”

“She really motored over the final bit of the race and she did that at her previous win,” she said.

Why Take Time was bred by McLeod and her parents John and Ruth McLeod from a mare they raced on lease named Gee Why and this is that mare’s first foal.

The mare showed a lot of potential as a two-year-old but she lost the plot and had to be spelled.

“As a young horse she developed a habit of stopping whenever she was pulled out wide to make a run in the end she became a real nightmare to train.”

“It has taken a while to try and get her head right and the turning point came when we trialed her with a horse we knew she could beat and when she did beat it home a few times her confidence lifted.”

“Although she still won’t finish the race off if she is left parked out wide on her own,” she said.

McLeod said Why Take Time (Time Stands Still-Ghee Why) is likely to have her next start in Launceston this Sunday night in a C1-C1 mares race over 2200m.