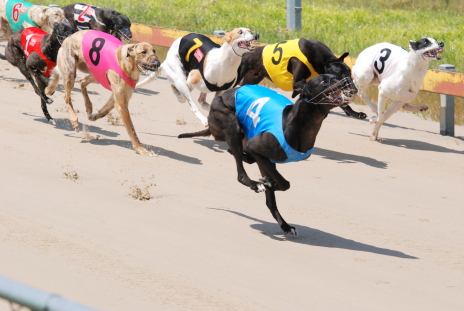 FORMER Victorian greyhound Wicked Magic made an impressive start to his Tasmanian campaign with an emphatic win in a juvenile event over 461 metres at Tattersall’s Park in Hobart today.

Now in the care of top trainer Ted Medhurst, Wicked Magic showed exceptional early speed from box four to lead the field to the top turn and when he slipped into overdrive at the top of the home straight he left his rivals in his wake.

Wicked Magic ($2.00 favourite) hit the line 12 lengths clear of Spotted Velocity with Hellyeah Pete two lengths away third with the winner running the 461-metre trip in a respectable 26.42s.

The dog had 10 starts in Victoria that included a minor placing at The Meadows at only his second outings and four minor placings on country tracks prior to crossing Bass Strait.

Wicked Magic (Hallucinate-Wicked Witch) has been in the care of Medhurst for about a month.

The dog is owned by Ian Garland and this is the first dog Medhurst has trained for the prominent Victorian owner.