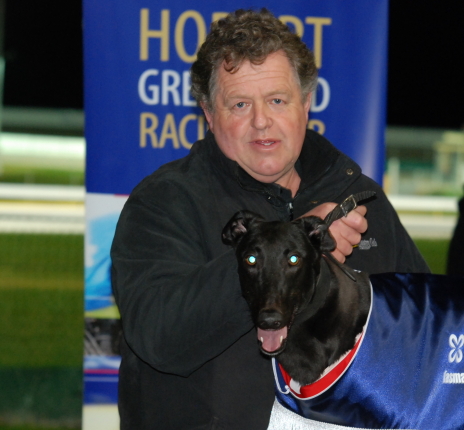 TOP Tasmanian greyhound trainer Ted Medhurst made a clean sweep of the state finals of the National Sprint and Distance Championships at Tattersall’s Park in Hobart last night.

Medhurst will be represented in the Sprint final (461m) by Rob Pines and classy stayer Bell Haven will represent the kennel in the National Distance Championship over 709 metres.

Rob Pines made full use of the inside box to fly the lids and have a two-length advantage on his rivals heading to the top turn.

New Recruit (8) and Speed Direct (2) closed the gap and loomed large at the top of the home straight but try as they did Rob Pines was too strong at the business end of proceedings.

Rob Pines scored by almost five lengths from New Recruit with his kennel mate Bergermeister getting up for third along the fence ahead of Irinka Julie and Speed Direct.

“This is a very smart dog and I’ve set him for this some time back,” Medhurst said.

“He made the most of a good draw and I’m just hoping he fares as well in the big race,” he said.

Rob Pines stopped the clock at 25.96 which was a personal best.

The dog suffered a setback about three months ago but Medhurst was able to nurse him back to health.

“He tore a muscle when he fell in a race about three months ago but he recovered well and he’s at his top at the right time,” he said.

Mick Stringer was happy with New Recruit’s effort to finish second, given he had to work had to get across from box eight and copped bump around the top turn.

“He’s in the final and that was the objective,” Stringer said.

Medhurst declared some time back that Bell Haven is the best stayer he has ever trained and she showed all the characteristics of a genuine star in winning the State Distance final.

Bell Haven began only fairly from box eight and she had to work very hard early to eventually get across to the rail heading down the back stretch.

Her litter brother Jethro (Head Bound-It’s A She) began poorly from box two and despite hunting up along the rail nearing the first turn he copped a few checks before settling third as they sped towards the top turn.

Tadmore Dunoon led from box one but settled behind Bell Haven while Jethro eventually got into clear racing room and he made his charge nearing the home turn.

It looked as if Jethro would cruise past his litter sister but Bell Haven had other ideas and refused to wilt.

The classy bitch went on to defeat Jethro by over a length with the other litter brother Beaudine a closing third but some distance away.

“I couldn’t believe my eyes when Bell Haven began so poorly so she’s done a really good job to win like she did,” Medhurst said.

“She is a very progressive bitch that is really developing as a stayer.”

Bell Haven covered the 709 metres in 41.35 which was a fraction slower than her personal best, although Jethro is the track record holder having taken that away from his litter sister by clocking 41.30 in winning his State heat of the National Sprint series.

Jethro’s trainer Butch Deverell was full of praise for his dog.

“Jethro was slow out and he copped a buffering at the first turn and again down the back so given the circumstances I’m more than pleased with his effort,” Deverell said.

Tasmania is fortunate to have it’s best performed sprinters and distance dogs into their respective National finals.

The National Sprint and Distance Championships will be run on Saturday, August 25 in a twilight fixture with the first race scheduled at 5.12pm and the last at just beyond 8pm.