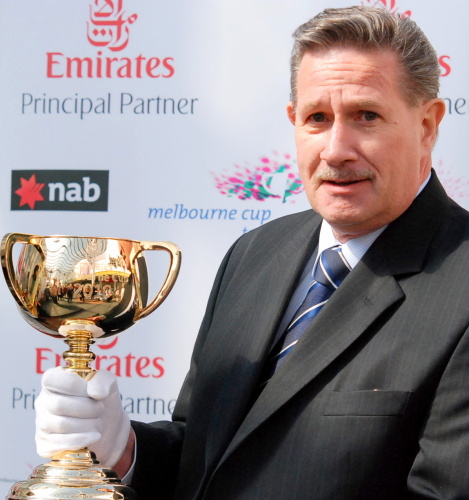 A PIECE of Australian history was the focal point in the Elizabeth Street Mall in Hobart today where the Emirates Melbourne Cup was on display as part of a nationwide tour of the trophy that is attached to the race that stops a nation.

It was all a part of the 150th anniversary celebrations of the Emirates Melbourne Cup and Hobart was one of the privileged cities to be included on the Australasian tour.

It has been the intention of the Victoria Racing Club to promote the 150th running of the Cup by paying tribute to cities and regional and rural destinations that are intrinsically linked to the race’s rich history.

The Melbourne Cup weighs in at around four kilograms and it was presented in front of over 500 people who gathered to get a glimpse of the 18ct gold trophy.

Those who braved the windy conditions were rewarded with an opportunity to have their photograph taken holding the very cup that will be presented to the owners of this year’s Melbourne Cup winner.

Former Melbourne Cup-winning jockey Bob Skelton is this year’s Tour Ambassador and he was on hand to recall his victory aboard Van Der Hum in the famous 1976 Cup during which the heavens opened up forcing the Cup to be run in the most horrendous conditions in the race’s modern day history.

“This is a real honor to be travelling around Australia and New Zealand talking about this wonderful race that has long been one of the greatest sporting events in the world,” Skelton said.

“I get the chance to tell a few stories of my experiences in the race and in particular my win on Van Der Hum in 1976,” he said.

Skelton rode 20 winners over the Melbourne Cup distance of 3200 metres (two miles) making him the most successful two-mile rider in the Southern Hemisphere.

VRC Melbourne Cup Tour executive Judith Fitzmaurice gave all in attendance an in-depth analysis on the Cup and what it represents and she also interviewed Skelton who reeled off numerous anecdotes of his experiences in Melbourne Cups and in particular the 1976 event.

The Melbourne Cup Tour began on August 2 in Sale in country Victoria with stops at Birdsville and Winton in Queensland before making its way to Hobart.

The Cup will now travel to Western Australia before heading to New Zealand and it will make its final stop back in Melbourne on October 24.

Tasracing held a competition that ran in conjunction with the Melbourne Cup Tour visit to Hobart that offered the winner a goods package worth $2500 and included a 32-inch LG TV, which was won by Rod Pursell from Sorell.