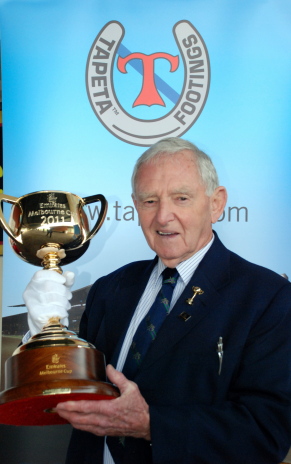 THE decision by the Racing Victoria VRC to travel the Emirates Melbourne Cup around the nation as a promotion for each year’s big race has been one of the club’s greatest promotions, as evidenced by the Cup’s journey to Tasmania for the past three years.

Touring the actual Melbourne Cup that will be handed to the connections of that year’s victor has in some way given the Cup back to the people of Australia.

To grasp the Cup is an awesome experience and something that this writer can recommend to any racing enthusiast.

The 2011 Cup and the entourage that travels with the prized trophy visited the Devonport Racing Club last Sunday. The Cup was also taken to Deloraine where a bronze statue of one of Tasmania’s Melbourne Cup winners Malua takes pride of place in the town centre.

Each year the VRC secures two travelling special guests to travel with the Cup and this year former great jockey Jim Johnson and former trainer Mick Robins were chosen to accompany the gold chalice on its journey around the nation.

Jim Johnson won three Melbourne Cups with Gatum Gatum his first in 1963 followed by successive wins aboard Rain Lover in 1968 and 1969.

Robins was responsible for training Rain Lover to his two epic victories.

Listen to what Jim Johnson had to say about his association with the Melbourne Cup – click here .